It is located in front of Ananta Samakhom Throne Hall in Dusit Palace, Dusit, Bangkok, which was the former reception hall of the palace where King Chulalongkorn Rama V once lived, and was later used as the first parliament building. On 24 June 1932, the plaza and the throne hall witnessed one of the most important events in Thai history as the People's Party staged a bloodless revolution that transformed the country from absolute monarchy to democratic constitutional monarchy. The plaza was the rally site for People's Party supporters demanding the constitution. The first permanent constitution was ceremoniously granted in the Ananta Samakhom Throne Hall on 10 December 1932. Next to the plaza is Amporn Garden, the venue of the annual Red Cross Fair. Dusit Zoo is also located near the plaza. At the center of the plaza is the Equestrian Statue of King Chulalongkorn Rama V, the Great Beloved King.

The Throne Hall is a two storey construction with a large dome (49.5 m high) in the centre, surrounded by six smaller domes. The domes and walls are covered with paintings by Professor Galileo Chin...

Wat Benchamabophit Dusitvanaram is a Buddhist temple in the Dusit district of Bangkok, Thailand. Also known as the marble temple, it is one of Bangkok's most beautiful temples and a major tourist a...

The first permanent residence in Dusit Garden was Vimanmek Mansion, built in 1900 by royal command of HM King Rama V.  The King had the Mundhat Ratanaroj Mansion Chudhadhuj Palace at Koh Sri Chang....

The Government House is the offices of the Prime Minister of Thailand and the appointed cabinet ministers. It also contains conference rooms and is used for state functions and receptions of foreig...

The Bangkok municipality then transferred Axis Deer and various animals from Suan Umporn, plus crocodiles and monkeys from Suan Saranrom into the zoo. A request was also made for royal elephants fr...

King Prajadhipok Museum is situated in the area of the Department of Public Works and Town & Country Planning Building at the Parn Fah Leelad Bridge. It was built during 1906 with the architecture ...

Located just adjacent to Wat Ratchanatdaram Worawihan, this royal pavilion is another place apart from Sanam Luang in front of Grand Palace where royal ceremonies are held. There is a statue of Kin...

The monument to commemorate the King Rama III of the current Chakri Dynasty sets by the historic Ratchadamnoen Klang Road, in front of Wat Ratchanatdaram, the temple of his reign. King Rama III or ... 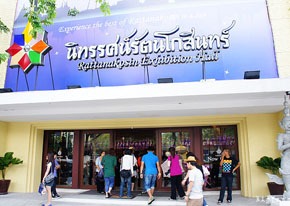 The temple is best known for the Loha Prasat, a multi-tiered structure 36 m high and having 37 metal spires, signifying the 37 virtues toward enlightenment. It is the third Loha Prasada (brazen pal...

Wat Saket, popularly known as the Golden Mount or ‘Phu Khao Thong’, is a low hill crowned with a gleaming gold chedi. Within, the 58-metre chedi houses a Buddha relic and welcomes worshippers all y...

While impressive looking, at the time of writing all entrance to the fort has been blocked off making the draw to this spot another feature all together. In the shade of Phra Sumen Fort is Santicha...

Khaosan Road or Khao San Road (Thai: ถนนข้าวสาร) is a short (410 meter long) street in central Bangkok, Thailand constructed in 1892 during the reign of Rama V.[1] It is in the Bang Lamphu area of ...

Khaosan Garden has been opened since the end of 2013 after the restorative of Baan Krai Jitti. A 100-year teakwood house decorated with works of famous artists. Tourists can feel the shady atmosphe...

Wat Suthat & Giant SwingWat Suthat Thepwararam , constructed in 1807, is one of the most important temples of Thailand and is regarded to have an excellent plan. The ordination hall is the longest ...

The museum was established and opened in 1874 by King Rama V to exhibit relics from the rule of King Rama IV's rule. Today the galleries contain exhibits covering Thai History back to Neolithic tim... 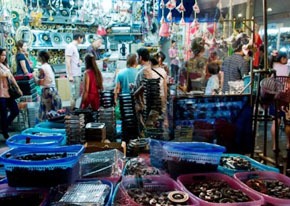 Khlong Thom market is located at Maha Chak road between Yaowarat (China Town) and Charoen Krung road. It is where many products are sold such as electricity devices, computer appliances, stereos, g... 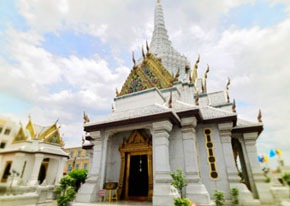 Right opposite the northeastern corner of the Grand Palace complex finds the sacred Bangkok City Pillar Shrine. According to the ancient Siamese (Thai) belief, a city pillar needs to be installed u...